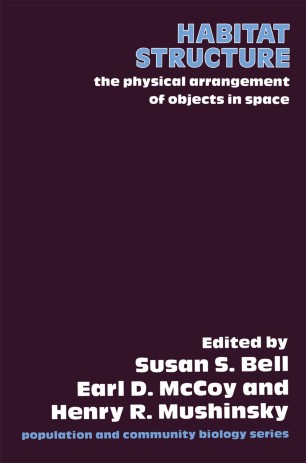 The physical arrangement of objects in space

We conceived the idea for this book after teaching a graduate seminar on 'Habitat Complexity' at The University of South Florida. Discussions during the seminar led us to conclude that similar goals were to be found in studies of the topic that spanned the breadth of ecological research. Yet, the exact meaning of 'habitat structure', and the way in which it was measured, seemed to differ widely among subdisciplines. Our own research, which involves several sorts of ecology, convinced us that the differences among subdisciplines were indeed real ones, and that they did inhibit communica­ tion. We decided that interchange of ideas among researchers working in marine ecology, plant-animal interactions, physiological ecology, and other more-or-less independent fields would be worthwhile, in that it might lead to useful generalizations about 'habitat structure'. To foster this interchange of ideas. we organized a symposium to attract researchers working with a wide variety of organisms living in many habitats, but united in their interest in the topic of 'habitat structure'. The symposium was held at The University of South Florida's Chinsegut Hill Conference Center, in May. 1988. We asked participants to think about 'habitat structure' in new ways; to synthesize important, but fragmented, information; and. perhaps. to consider ways of translating ideas across systems. The chapters contained in this book reflect the participants' attempts to do so. The book is divided into four parts, by major themes that we have found useful categorizations.