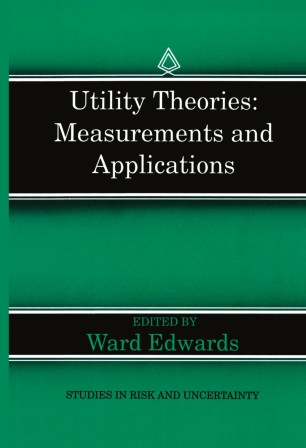 Part of the Studies in Risk and Uncertainty book series (SIRU, volume 3)

The Conference on "Utility: Theories, Measurements, and Applications" met at the Inn at Pasatiempo in Santa Cruz, California, from June II to 15, 1989. The all-star cast of attendees are listed as authors in the Table of Contents of this book (see p. V), except for Soo Hong Chew and Amos Tversky. The purpose of the conference, and of National Science Foundation Grant No. SES-8823012 that supported it, was to confront proponents of new generalized theories of utility with leading decision analysts com­ mitted to the implementation, in practice, of the more traditional theory that these new theories reject. That traditional model is variously iden­ tified in this book as expected utility or subjectively expected utility maximization (EU or SEU for short) and variously attributed to von Neumann and Morgenstern or Savage. I had feared that the conference might consist of an acrimonious debate between Olympian normative theorists uninterested in what people actually do and behavioral modelers obsessed with the cognitive illusions and uninterested in helping people to make wise decisions. I was entirely wrong. The conferees, in two dramatic straw votes at the open­ ing session, unanimously endorsed traditional SEU as the appropriate normative model and unanimously agreed that people don't act as that model requires. (These votes had a profound impact on my thinking; detail about them and about that impact is located in Chapter 10.