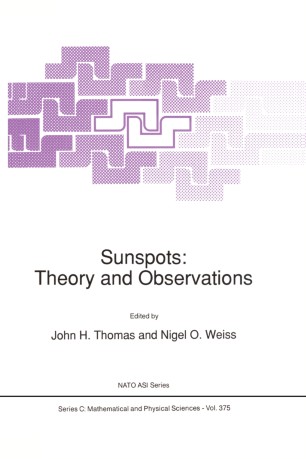 This volume contains the invited papers presented at the NATO Advanced Research Workshop on the Theory of Sunspots, held in Cambridge, England, 22-27 September 1991. The idea of holding this Workshop first arose during the Solar Optical Telescope work­ shop on Theoretical Problems in High-Resolution Solar Physics in Munich in 1985. At that meeting, separate discussion groups were formed to consider specific topics in solar physics. The discussion group on sunspots recommended that there be a meeting devoted to theoretical problems associated with sunspots, the motivation being the consensus that theory seemed to lag behind the observational evidence in our quest for a satisfactory un­ derstanding of the physics of sunspots. This recommendation was warmly received and the two of us were designated to organize the Workshop. Although the Workshop eventually took place later than originally envisioned, the de­ lay turned out to be fortunate and the timing of the Workshop was ideal for a number of reasons. There have been remarkable improvements in high-resolution observations of sunspots in the past few years, and many important new observational results were pre­ sented for the first time at this Workshop (by groups working at the Lockheed Palo Alto Research Laboratories, the Swedish and German telescopes in the Canary Islands, and the V. S. National Solar Observatory). Vector magnetographs and Stokes polarimetry have at last given us reliable measurements of the vector magnetic fields in sunspots.