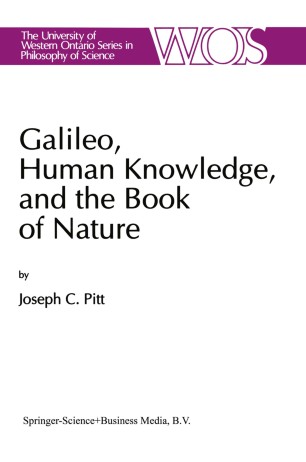 Galileo, Human Knowledge, and the Book of Nature

Part of the The University of Western Ontario Series in Philosophy of Science book series (WONS, volume 50)

Galileo is revered as one of the founders of modern science primarily because of such discoveries as the law of falling bodies and the moons of Jupiter. In addition to his scientific achievements, Professor Pitt argues that Galileo deserves increased attention for his contributions to the methodology of the new science and that his method retains its value even today.
In a detailed analysis of Galileo's mature works, Pitt reconstructs crucial features of Galileo's epistemology. He shows how Galileo's methodological insights grow out of an appreciation of the limits of human knowledge and he brings fresh insight to our concept of Galileo's methodology and its implications for contemporary debates. Working from Galileo's insistence on the contrast between the number of things that can be known and the limited abilities of human knowers, Pitt shows how Galileo's common sense approach to rationality permits the development of a robust scientific method. At the same time, Pitt argues that we should correct our picture of Galileo, the culture hero. Instead of seeing him as a martyr to the cause of truth, Galileo is best understood as a man of his times who was responding to a variety of social pressures during a period of intellectual and political turmoil.
This book will be of interest to philosophers and to historians and sociologists of science as well as to a general readership interested in the scientific revolution.