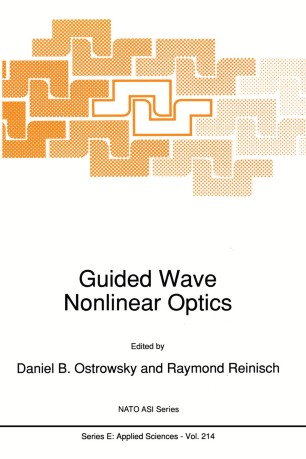 The object of this school, held at Cargese, Corsica (France) from August 12th to 24th 1991, was the presentation of the field of guided wave nonlinear optics in a comprehensive, coherent, and heuristic fashion. It seems appropriate that this school began with an historical introduction by Professor Nicolaas Bloembergen of Harvard, the acknowledged "father" of nonlinear optics, in general, and concluded with a round table discussion headed by Dr. Eric Spitz, the Scientific Director of a multinational electronics company interested in developing industrial applications of guided wave nonlinear optics. The lectures covered both the theoretical framework of the field and applications to basic scientific research, optical communications and technical instrumentation. Specific topics developed included materials for guided wave nonlinear optics, nonlinear interactions using integrated optical guides, nonlinear surface waves, solitons, fiber nonlinear optics, ultra-fast coupler switching as well as the related topic of fiber and integrated optical lasers and amplifiers. Lectures have also been devoted to squeezed states, chaos and strange attractors. The subjects covered by the school underlines one of the major ways in which this field has evolved over the past thirty some odd years. The path from the original experiments with materials requiring mega-watt power lasers to the recent developments in guided wave configurations using milliwatt power diode lasers is marked by the conjunction of ever improving fundamental scientific comprehension and continuing technological developments.