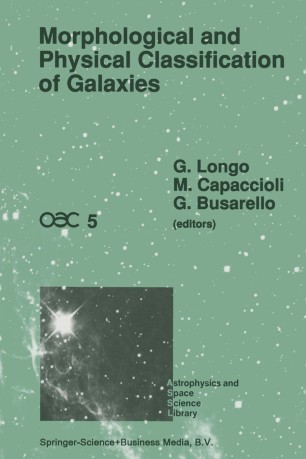 Morphological and Physical Classification of Galaxies

Proceedings of the Fifth International Workshop of the Osservatorio Astronomico di Capodimonte Held in Sant’Agata Sui Due Golfi, Italy, September 3–7, 1990

The morphological scheme devised by Hubble and followers to classify galaxies has proven over many decades to be quite effective in directing our quest for the fundamental pa­ rameters describing the extragalactic manifold. This statement is however far more true for spirals than for ellipticals. Echoing the concluding remarks in Scott Tremaine's sum­ mary talk at the Princeton meeting on Structure and Dynamics of Elliptical Galaxies, "the Hubble classification of spirals is useful because many properties of spirals (gas con­ tent, spiral arm morphology, bulge prominence, etc. ) all correlate with Hubble time. By contrast, almost nothing correlates with the elliptical Hubble sequence El to E7. " During the last few years much effort has been put into the search for a more meaningful classification of ellipticals than Hubble's. Concomitantly, forwarded by some provocative conjectures by R. Michard, the classical question of whether E galaxies form a physically homogeneous family has been brushed up once more. Results of these and other parallel studies look rather promising and point to suture part of the dichotomy between ellipticals and disk galaxies which had become popular in the early eighties, owing to dynamical arguments. At the same time it appears more and more clear that, besides the usual genetic varieties of galaxies, products of environmental evolution must also be contemplated in building our modern picture of the "reign of galaxies" . The above considerations prompted us to solicit Prof.