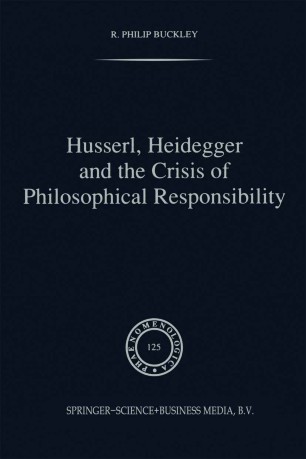 Husserl, Heidegger and the Crisis of Philosophical Responsibility

The guiding dictum of phenomenology is "to the things themselves. " This saying conveys a sense that the "things," the "phenomena" with which we are confronted and into which we seek some insight are not as immediately accessible as may be imagined. Phenomena, however, are often hidden not by their distance from us, but by their very proximity, by the fact that they are taken for granted as being self-evident and understood by all. Even the most common, everyday phenomena and the words used to describe them often reveal, upon closer inspection, a degree of complexity which had previously been unsuspected. Upon interrogation, that which had been taken to be self-evident and widely understood shows itself otherwise; assumed self-evidence frequently masks unintelligibility and common understanding can be a sign of a lack of understanding. One phenomenon which is extremely proximate in our times is the phenomenon of "crisis. " To be sure, one can hardly avoid the word these it abound in periodicals and newspapers, but also, in days. Not only does the learned journals of medicine, political science, economics, art, and law, barely does an edition appear without the discussion of a crisis of one sort or another within these respective fields. One is tempted to remark, along with Umberto Eco, that "crisis sells well. "l One is also inclined to be suspicious of the collective malaise of academics.