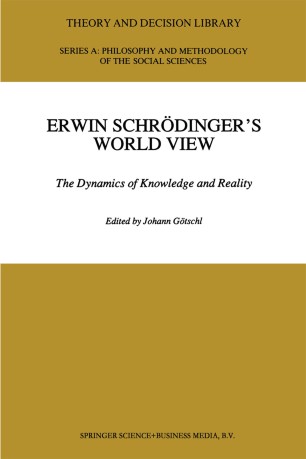 The Dynamics of Knowledge and Reality

Erwin Schrödinger is one of the greatest figures of theoretical physics, but there is another side to the man: not only did his work revolutionize physics, it also radiacally changed the foundations of our modern worldview, modern biology, philosophy of science, philosophy of the mind, and epistemology.
This book explores the lesser-known aspects of Schrödinger's thought, revealing the physicist as a philosopher and polymath whose highly original ideas anticipated the current merging of the natural and the social sciences and the humanities.
Thirteen renowned scientists and philosophers have contributed to the volume. Part I reveals the philosophical importance of Schrödinger's work as a physicist. Part II examines his theory of life and of the self-organization of matter. Part III shows how Schrödinger's ideas have influenced contemporary philosophy of nature and our modern view of the world, drawing a fascinating picture of the ongoing synthesis of nature and culture: one of the most interesting developments of modern thought.
The volume also contains the most comprehensive bibliography of Schrödinger's scientific work, making it at the same time a book of acute contemporary relevance and a major work of reference.