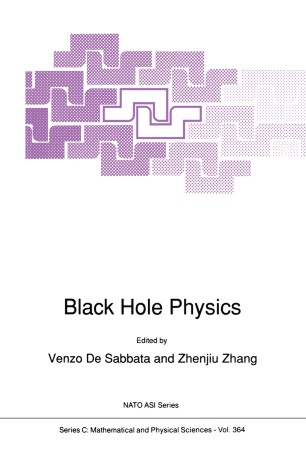 In these last years Black hole Physics has developed rapidly both from theoretical and observational aspects: especially as regards quantum aspects many things must be clarified as for instance the processes occuring near mini black holes with spontaneous creation of particles that eventually lead to the evaporation of black hole. In these last stages probably a connection with string theory will appears. This field of research was subject of the NATO Adavanced study Institute on "Black Hole Physics" which was held at the Ettore Majorana Center for Scientific Culture in Erice (Sicily, th Italy) from May 12th through May 22 , 1991. It was at the same time the 12th Course of the International School of Cosmology and Gravitation. During this 12th Course, after recalling the starting point that is the concept of black hole in Newton theory, the lectures are gone through classical, quantum, cosmological and astrophysical aspects. Of course in order to understand fully the behaviour of these objects one is faced with a large number of broad areas related to different branches of physics. In fact have been widely treated not only classical aspects, thermodynamics, entropy, internal dynamics, cosmology, inflation and astrophysics but quantum behaviour involving creation of particles, Hawking rad­ iation, until the modern theory of strings and superstrings that claims the unification of all interactions. So the physics involved and discussed in the various lectures goes from cosmology and very early universe to that of elementary particles including neutrino physics.