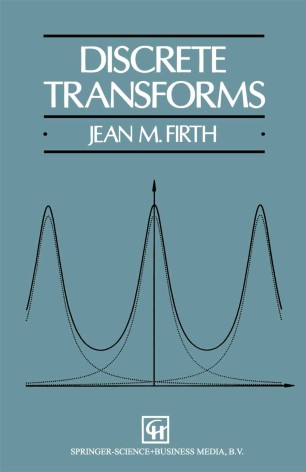 The analysis of signals and systems using transform methods is a very important aspect of the examination of processes and problems in an increasingly wide range of applications. Whereas the initial impetus in the development of methods appropriate for handling discrete sets of data occurred mainly in an electrical engineering context (for example in the design of digital filters), the same techniques are in use in such disciplines as cardiology, optics, speech analysis and management, as well as in other branches of science and engineering. This text is aimed at a readership whose mathematical background includes some acquaintance with complex numbers, linear differen­ tial equations, matrix algebra, and series. Specifically, a familiarity with Fourier series (in trigonometric and exponential forms) is assumed, and an exposure to the concept of a continuous integral transform is desirable. Such a background can be expected, for example, on completion of the first year of a science or engineering degree course in which transform techniques will have a significant application. In other disciplines the readership will be past the second year undergraduate stage. In either case, the text is also intended for earlier graduates whose degree courses did not include this type of material and who now find themselves, in a professional capacity, requiring a knowledge of discrete transform methods.