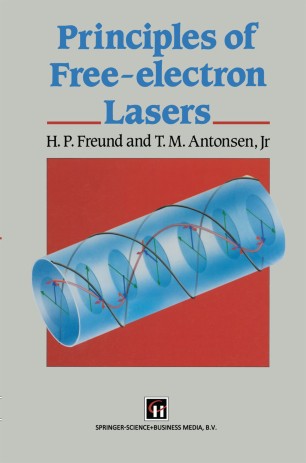 At the time that we decided to begin work on this book, several other volumes on the free-electron laser had either been published or were in press. The earliest work of which we were aware was published in 1985 by Dr T. C. Marshall of Columbia University [1]. This book dealt with the full range of research on free-electron lasers, including an overview of the extant experiments. However, the field has matured a great deal since that time and, in our judgement, the time was ripe for a more extensive work which includes the most recent advances in the field. The fundamental work in this field has largely been approached from two distinct and, unfortunately, separate viewpoints. On the one hand, free-electron lasers at sub-millimetre and longer wavelengths driven by low-energy and high-current electron beams have been pursued by the plasma physics and microwave tube communities. This work has confined itself largely to the high-gain regimes in which collective effects may play an important role. On the other hand, short-wavelength free-electron lasers in the infrared and optical regimes have been pursued by the accelerator and laser physics community. Due to the high-energy and low-current electron beams appropriate to this spectral range, these experiments have operated largely in the low-gain single-particle regimes. The most recent books published on the free-electron laser by Dr C. A.