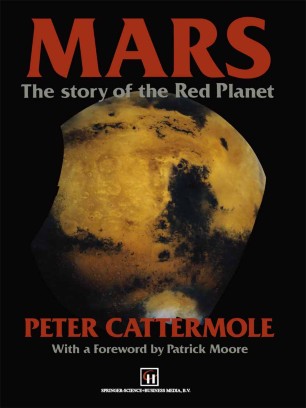 The story of the Red Planet

As I write this short preface, the red orb of Mars is high in the eastern sky, and is brighter than it has been for many years. Last night my telescope again revealed the strange polar hood which is a feature of the planet at this time in its cycle. Because of its current prominence in the night sky, it is a very appropriate time to bring together and reappraise what we know of Mars and look forward to the next wave of planetary exploration. The initial notion of writing a book about Mars is an exciting one; the practicalities involved in working through and completing the project are, however, more than a trifle exacting. The first problem I encountered was the sheer vastness of the library of information about Mars which now exists. The second was the natural extension of the first, that is, how best to analyse it and reach widely acceptable interpretations. I have tried to write the story of Mars in a logical and unbiased way, however, we all have our individual prejudices, and I would be less than truthful if I did not admit to personal bias here and there. With this in mind, I apologise to any authors who may feel either misinterpreted or less than adequately acknowledged. The project is now completed and has been superbly prepared by Chapman & Hall.