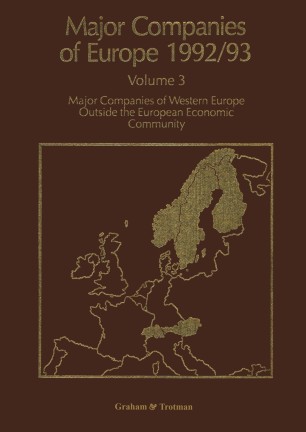 Volume 3 Major Companies of Western Europe Outside the European Community

Volumes 1& 2 Guide to the MAJOR COMPANIES OF EUROPE 1992/93, Volume1, arrangementofthe book contains useful information on over 4000 of the top companies in the European Community, excluding the UK, over 1100 This book has been arranged in order to allow the reader to companies of which are covered in Volume 2. Volume 3covers find any entry rapidly and accurately. over 1300 of the top companies within Western Europe but outside the European Community. Altogether the three Company entries are listed alphabetically within each country volumes of MAJOR COMPANIES OF EUROPE now provide in section; in addition three indexes are provided in Volumes 1 authoritative detail, vital information on over 6500 of the largest and 3 on coloured paper at the back of the book, and two companies in Western Europe. indexes in the case of Volume 2. MAJOR COMPANIES OF EUROPE 1992/93, Volumes 1 The alphabetical index to companies outside the Continental & 2 contain many of the largest companies in the world. The EC lists all companies having entries in Volume 3 in area covered by these volumes, the European Community, alphabetical order irrespective of their main country of represents a rich consumer market of over 320 million people. operation. Over one third of the world's imports and exports are channelled through the EC. The Community represents the The alphabetical index in Volume 3to companies within each world's largest integrated market.