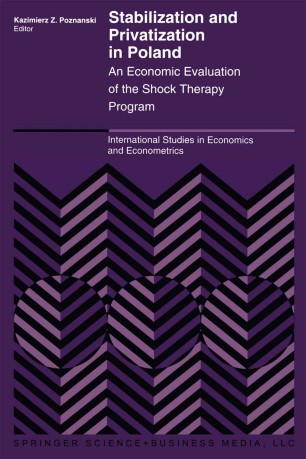 Stabilization and Privatization in Poland

An Economic Evaluation of the Shock Therapy Program

Part of the International Studies in Economics and Econometrics book series (ISEE, volume 29)

Stabilization and Privatization: An Economic Evaluation of the Shock Therapy Program is the first comprehensive account of Poland's economic transition since mid-1989. Monetary stabilization, trade liberalization (including convertibility) and privatization of state capital assets are discussed. Sources of economic recession which have accompanied the post-1989 transition are analyzed. The role of demand-side factors (i.e. monetary contraction) is weighed against that of supply-side factors (i.e. credit availability). The prevailing view is that the recession has been supply-type rather than demand-type. Economic performance has been impacted by the lack of a proper institutional framework (e.g. a segmented banking sector, diluted property rights). Arguments in favor of evolutionary reforms and market enhancing measures are presented.
Stabilization and Privatization examines the main components of Poland's shock therapy program implemented in 1990. Post-shock recession, lasting at least through 1992, is examined to establish whether a sharp decline in output was caused by excessive demand contraction or lack of accommodating credit policies. The merits of an evolutionary approach and a more proactive state are debated.