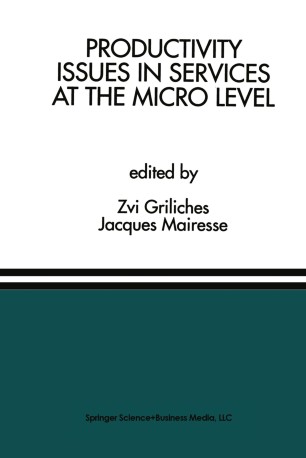 Productivity Issues in Services at the Micro Level

A Special Issue of the Journal of Productivity Analysis

7 take advantage of the panel structure of their data to control for possible errors of specifica­ tion in their models. It is interesting to note that the econometric and DEA methods may be closer than some of their respective advocates seem to believe. Several of the studies show that the former as well as the latter can be effectively used to assess the relative effi­ ciency of groups of firms or individual firms, and one of them explicitly compare results arising from both (Fecher et al.). Econometric techniques can also be nonparametric and applied to estimating cost or production frontiers (and not only "average" functions), while ultimately DEA should be amenable to statistical inference. Perhaps the most valuable feature of all the analyses is their care and ingenuity in putting together the data, measuring variables, and pulling out relevant information. Many of them are not content with an overall output measure, but endeavor to manage with less aggregated measures. Nearly all also include in the estimated models a number of auxiliary variables intended to control for specific attributes of outputs, inputs, or production techniques, and other characteristics of firms.