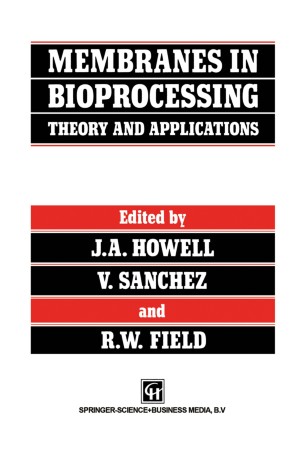 Membranes in Bioprocessing: Theory and Applications

1. A. HOWELL School ofChemical Engineering, University ofBath, Claverton Down, Bath, UK, BA2 7AY 1.1 WHAT IS A MEMBRANE PROCESS? Every day over 20 million litres of brackish water are pumped out of the ground near Jeddah in Saudi Arabia and passed through thin sheets of cellulose acetate known as reverse osmosis membranes before being used as part of the city's water supply. In St Maurice les Chateauneuf, France three million litres a day of ground water are ultrafiltered to supply the city and on test sites in Australia settled sewage is being disinfected by being passed through microfiltration membranes. Many of the foods we eat and beverages we drink have used membranes during their processing. Orange juice can be concentrated by membranes to make a concentrate which retains more of the flavour than does evaporation. Milk can be concentrated slightly by means of a membrane before making a cheese in a process which produces no whey. Gases rising from the ground in a waste tip can be piped away and the carbon dioxide separated from the methane by a membrane process allowing the methane then to be used as a fuel, simultaneously saving energy and reducing the greenhouse effect since methane is more effective as a greenhouse gas than carbon dioxide.