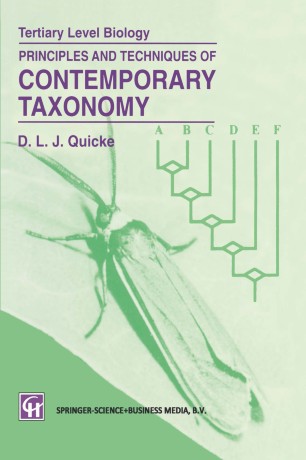 Principles and Techniques of Contemporary Taxonomy

Part of the Experimental and Clinical Neuroscience book series (ECN)

Taxonomy is an ever-changing, controversial and exCitmg field of biology. It has not remained motionless since the days of its founding fathers in the last century, but, just as with other fields of endeavour, it continues to advance in leaps and bounds, both in procedure and in philosophy. These changes are not only of interest to other taxonomists, but have far reaching implications for much of the rest of biology, and they have the potential to reshape a great deal of current biological thought, because taxonomy underpins much of biological methodology. It is not only important that an ethologist. physiologist. biochemist or ecologist can obtain information about the identities of the species which they are investigating; biology is also uniquely dependent on the comparative method and on the need to generalize. Both of these necessitate knowledge of the evolutionary relationships between organisms. and it is the science of taxonomy that can develop testable phylogenetic hypotheses and ultimately provide the best estimates of evolutionary history and relationships.