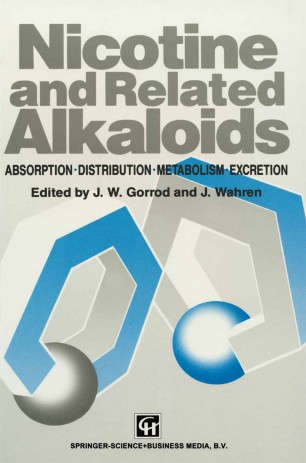 Nicotine is an alkaloid which is present, together with a number of minor alkaloids, in tobacco and a wide variety of other plants. The introduction of tobacco as a therapeutic agent against diverse pathologi­ cal and physiological conditions resulted in the widespread exposure of people to nicotine, and the subsequent recognition of the pleasurable effects of tobacco consumption. Tobacco may be used for pleasure by smoking it in pipes, cigars or cigarettes or by taking it in unsmoked form as oral and nasal tobacco snuff. Nonsmokers are exposed to nico­ tine through plant material and side-stream tobacco smoke. This means that in humans nicotine is always utilized in the presence of a very large variety of natural compounds or their pyrolysis products, depend­ ing on the route of administration. These compounds may modify the absorption, distribution, metabolism and excretion of nicotine and hence alter the duration of its pharmacological action. In recent years the use of nicotine in chewing gum and cutaneous patches has been developed as an aid to smoking cessation. The toxic properties of nicotine make it useful as an insecticide, which has led to its use in agriculture and horticulture. It has also recently been recog­ nized that tobacco consumption may be beneficial in the prevention of Parkinson's disease or in alleviating inflammatory bowel syndrome. The above observations have continued to stimulate research into the mode of action of this relatively simple molecule.