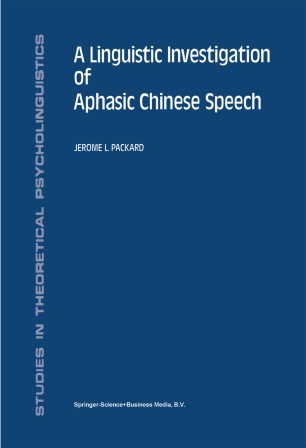 A Linguistic Investigation of Aphasic Chinese Speech is the first detailed linguistic analysis of a large body of aphasic Chinese natural speech data. This work describes how the major aphasia syndromes are manifest in Chinese, a language which differs significantly from languages upon which traditional aphasia theory is based. Following the Chinese data, a new explanation for the major aphasia syndromes is offered based on the cognitive science modularity hypothesis. The theory posits that Broca's aphasia is the result of computational deficits that occur within linguistic components, while Wernicke's aphasia is the result of deficits that occur in the transfer of information between components. It is demonstrated how the fluent and non-fluent characteristics of the major aphasia syndromes follow directly from the properties of cognitive modules.
Detailed linguistic descriptions of Broca's and Wernicke's aphasia in Chinese are provided, including a summary of diagnostics of aphasia type. The complete corpora of four aphasic Chinese speakers, including interlinear and free translations, are presented in an Appendix.