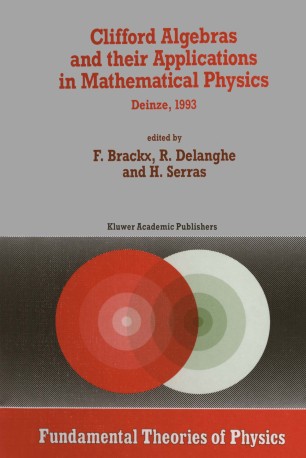 Clifford Algebras and their Applications in Mathematical Physics

Proceedings of the Third Conference held at Deinze, Belgium, 1993

This International Conference on Clifford AlgebrfU and Their Application, in Math­ ematical Phy,ic, is the third in a series of conferences on this theme, which started at the Univer,ity of Kent in Canterbury in 1985 and was continued at the Univer,iU de, Science, et Technique, du Languedoc in Montpellier in 1989. Since the start of this series of Conferences the research fields under consideration have evolved quite a lot. The number of scientific papers on Clifford Algebra, Clifford Analysis and their impact on the modelling of physics phenomena have increased tremendously and several new books on these topics were published. We were very pleased to see old friends back and to wellcome new guests who by their inspiring talks contributed fundamentally to tracing new paths for the future development of this research area. The Conference was organized in Deinze, a small rural town in the vicinity of the University town Gent. It was hosted by De Ceder, a vacation and seminar center in a green area, a typical landscape of Flanders's "plat pays" . The Conference was attended by 61 participants coming from 18 countries; there were 10 main talks on invitation, 37 contributions accepted by the Organizing Com­ mittee and a poster session. There was also a book display of Kluwer Academic Publishers. As in the Proceedings of the Canterbury and Montpellier conferences we have grouped the papers accordingly to the themes they are related to: Clifford Algebra, Clifford Analysis, Classical Mechanics, Mathematical Physics and Physics Models.