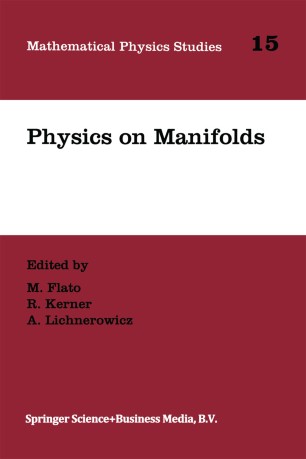 Proceedings of the International Colloquium in honour of Yvonne Choquet-Bruhat, Paris, June 3–5, 1992

This volume contains the proceedings of the Colloquium "Analysis, Manifolds and Physics" organized in honour of Yvonne Choquet-Bruhat by her friends, collaborators and former students, on June 3, 4 and 5, 1992 in Paris. Its title accurately reflects the domains to which Yvonne Choquet-Bruhat has made essential contributions. Since the rise of General Relativity, the geometry of Manifolds has become a non-trivial part of space-time physics. At the same time, Functional Analysis has been of enormous importance in Quantum Mechanics, and Quantum Field Theory. Its role becomes decisive when one considers the global behaviour of solutions of differential systems on manifolds. In this sense, General Relativity is an exceptional theory in which the solutions of a highly non-linear system of partial differential equations define by themselves the very manifold on which they are supposed to exist. This is why a solution of Einstein's equations cannot be physically interpreted before its global behaviour is known, taking into account the entire hypothetical underlying manifold. In her youth, Yvonne Choquet-Bruhat contributed in a spectacular way to this domain stretching between physics and mathematics, when she gave the proof of the existence of solutions to Einstein's equations on differential manifolds of a quite general type. The methods she created have been worked out by the French school of mathematics, principally by Jean Leray. Her first proof of the local existence and uniqueness of solutions of Einstein's equations inspired Jean Leray's theory of general hyperbolic systems.