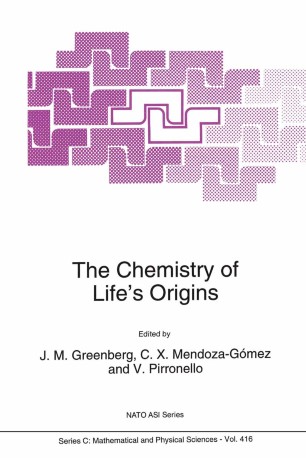 The Chemistry of Life’s Origins

This volume contains the lectures presented at the second course of the International School of Space Chemistry held in Erice (Sicily) from October 20 - 30 1991 at the "E. Majorana Centre for Scientific Culture". The course was attended by 58 participants from 13 countries. The Chemistry of Life's Origins is well recognized as one of the most critical subjects of modem chemistry. Much progress has been made since the amazingly perceptive contributions by Oparin some 70 years ago when he first outlined a possible series of steps starting from simple molecules to basic building blocks and ultimate assembly into simple organisms capable of replicating, catalysis and evolution to higher organisms. The pioneering experiments of Stanley Miller demonstrated already forty years ago how easy it could have been to form the amino acids which are critical to living organisms. However we have since learned and are still learning a great deal more about the primitive conditions on earth which has led us to a rethinking of where and how the condition for prebiotic chemical processes occurred. We have also learned a great deal more about the molecular basis for life. For instance, the existence of DNA was just discovered forty years ago.