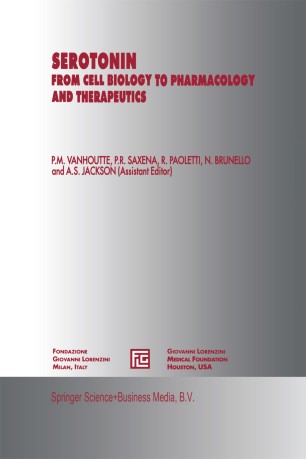 From Cell Biology to Pharmacology and Therapeutics

This volume contains the Proceedings of the invited lectures of the Second International Sym­ posium on SEROTONIN from Cell Biology to Pharmacology and Therapeutics held in Houston, Texas September 15-18, 1992. The meeting was held under the co-sponsorship of the Serotonin Club, the Giovanni Lorenzini Medical Foundation, and the Fondazione Giovanni Lorenzini. This volume discusses the major exploration in knowledge that has occurred recently of the complex role that 5- hydroxytryptamine (serotonin) plays in health and disease. In par­ ticular, these Proceedings highlight major breakthroughs in molecular biology and classification of receptor subtypes that are responsible for the many actions of the monoamine. The ever­ increasing importance of serotonin in central regulation, whether autonomic or behavioral is represented by a large number of chapters prepared by world experts. Additionally, the role of serotonin in peripheral organs is also discussed. Hence, this volume provides the reader with a unique, up-to-date review of this exciting and novel area of science. These Proceedings obviously are of great interest, not only to the researchers directly engaged in the quest for the understanding and unraveling of the actions of the interactions with serotonin as a major neurohumoral mediator, but also to all scholars and clinicians who wish to acquire a better understanding of the functioning of the brain and of peripheral organs. Since this volume was constructed as a compilation of invited lectures, the scientific content and the opinions expressed in the chapters are the sole responsibility of the authors.