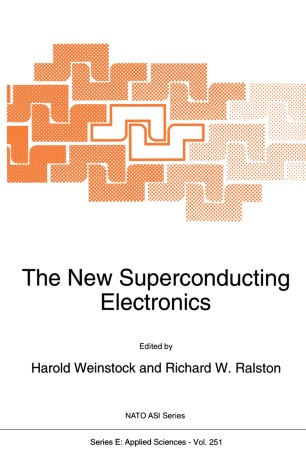 This volume is based on the proceedings of the NATO-sponsored Advanced Studies Institute (ASn on The New Superconducting Electronics (held 9-20 August 1992 in Waterville Valley, New Hampshire USA). The contents herein are intended to provide an update to an earlier volume on the same subject (based on a NATO ASI held in 1988). Four years seems a relatively short time interval, and our title itself, featuring The New Superconducting Electronics, may appear somewhat pretentious. Nevertheless, we feel strongly that the ASI fostered a timely reexamination of the technical progress and application potential of this rapid-paced field. There are, indeed, many new avenues for technological innovation which were not envisioned or considered possible four years ago. The greatest advances by far have occurred with regard to oxide superconductors, the so-called high­ transition-temperature superconductors, known in short as HTS. These advances are mainly in the ability to fabricate both (1) high-quality, relatively large-area films for microwave filters and (2) multilayer device structures, principally superconducting-normal-superconducting (SNS) Josephson junctions, for superconducting-quantum-interference-device (SQUID) magnetometers. Additionally, we have seen the invention and development of the flux-flow transistor, a planar three-terminal device. During the earlier ASI only the very first HTS films with adequate critical-current density had just been fabricated, and these were of limited area and had high resistance for microwave current.