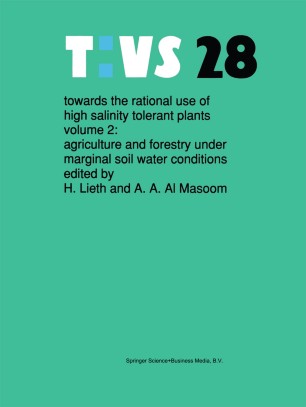 Towards the rational use of high salinity tolerant plants

The Symposium on high salinity tolerant plants, held at the University of Al Ain in December 1990, dealt primarily with plants tolerating salinity levels exceeding that of ocean water and which at the same time are promising for utilization in agriculture or forestry. These plants could be very useful for a country like the UAE where fresh water resources are very scarce and the groundwater available at some places is already very salty.
More than 60 million woody trees/shrubs have been planted so far and more are planned for the inland plains underlain with brackish groundwater.
These species were no solution for the widely barren shoreline of the UAE. Here mangrove species were of potential use, and one species, Avicennia Marina, occurs widely and has been successfully planted for about a decade.
Converting the tree plantations into economically useful cropping systems is still a problem requiring much research and development. The book deals in several sections with conventional irrigation systems using marginal water. The species used in these systems are mostly hybrids of conventional crops. The irrigation systems, however, have similar problems as may be expected for irrigation with seawater. Papers show the participants' experiments in this area. The volume serves as a link between scientists working for the improvement of classical irrigation systems and those interested in the application of a new dimension of salinity levels for irrigation water.