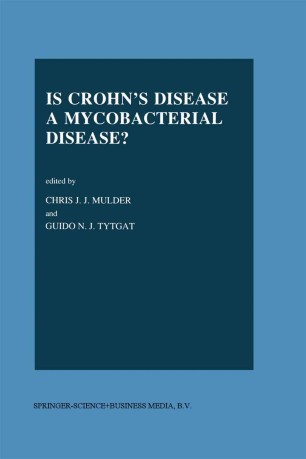 Is Crohn’s Disease a Mycobacterial Disease?

Part of the Developments in Gastroenterology book series (DIGA, volume 14)

IS CROHN'S DISEASE A MYCOBACTERIAL DISEASE'! The fact that the differential diagnosis of inflammatory bowel disease includes intestinal infections has been a source of much interest and clinical concern for many years. Since the recognition of ulcerative colitis and Crohn's disease as clinical entities, numerous attempts have been made to identify a specific organism resulting in the clinical and pathologic picture of Inflammatory Bowel Disease. The first suggestion about a connection between Johne's disease, a chronic mycobacterial enteritis in cattle, and Crohn' s disease occurred in 1913, when Dalziel described enteritis in humans which, although resembling intestinal tuberculosis, he believed to be a new disorder. Since the work of Crohn in the thirties a few investigators attempted to look for mycobacteria in Crohn's disease. Until now the work of Van Patter, Burnham and others did not receive widespread recognition. In 1984 the isolation of M. paratuberculosis was reported by Chiodini et al. This report initiated the current interest and controversy about a mycobacterial etiology in Crohn's disease. The hypothesis "Crohn's disease is Johne's disease" did not receive widespread recognition, but has lead to the first muIticentered efforts to determine whether or not mycobacteria are associated with Crohn's disease.