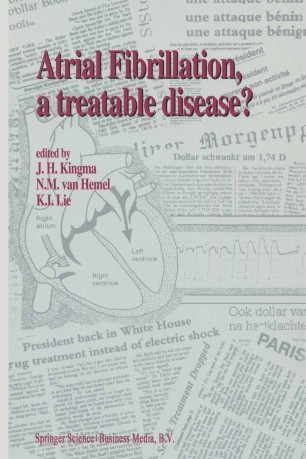 The attack of atrial fibrillation experienced by President Bush of the United States attracted more attention from the general public to atrial fibrillation than ever before. Also, there is a growing body of knowledge of the pathophysiologic mechanism, the pathology and epidemiology, and especially of the thrombo-embolic complications of this arrhythmia, which is responsible for a renewed interest of the clinician in this very common human arrhythmia. These new perspectives on atrial fibrillation were presented during a conference on `Atrial Fibrillation, a Treatable Disease?', organized on May 7, 1992, in Amsterdam, the Netherlands.
Atrial fibrillation is not the prerogative of the cardiologist only. Many practitioners from other areas in health care, in particular general physicians, internists and neurologists, are faced with this arrhythmia and its untoward consequences. This book bridges the gap between theory, experiment and the clinic. Emphasis is therefore on the selection of the optimal approach, including pharmacotherapy, catheter ablation, pacemaker and surgical therapy, based on the current scientific insights in the mechanism and prevention of atrial fibrillation.