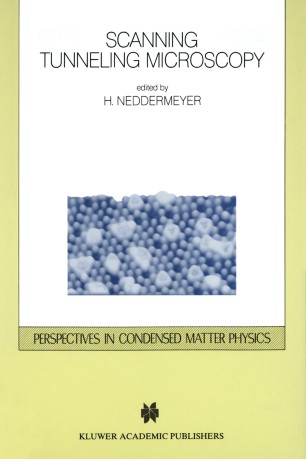 The publication entitled "Surface Studies by Scanning Tunneling Mi­ Rl croscopy" by Binnig, Rohrer, Gerber and Weibel of the IBM Research Lab­ oratory in Riischlikon in 1982 immediately raised considerable interest in the sur­ face science community. It was demonstrated in Reference R1 that images from atomic structures of surfaces like individual steps could be obtained simply by scanning the surface with a sharp metal tip, which was kept in a constant distance of approximately 10 A from the sample surface. The distance control in scanning tunneling microscopy (STM) was realized by a feedback circuit, where the electri­ cal tunneling current through the potential barrier between tip and sample is used for regulating the tip position with a piezoelectric xyz-system. A similar experi­ mental approach has already been described by Young et al. for the determination l of the macroscopic roughness of a surface. A number of experimental difficulties had to be solved by the IBM group until this conceptual simple microscopic method could be applied successfully with atomic resolution. Firstly, distance and scanning control of the tip have to be operated with sufficient precision to be sensitive to atomic structures. Secondly, sample holder and tunneling unit have to be designed in such a way that external vibrations do not influence the sample-tip distance and that thermal or other drift effects become small enough during measurement of one image.