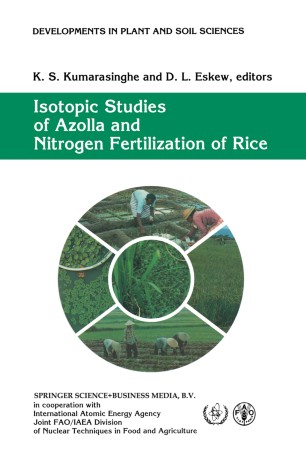 Isotopic Studies of Azolla and Nitrogen Fertilization of Rice

Part of the Developments in Plant and Soil Sciences book series (DPSS, volume 51)

Nitrogen is the most limiting element for crop production. Traditionally, expensive commercial fertilizers are used to correct soil nitrogen deficiencies. Indeed, 50% of the increase in rice yields after World War II can be attributed to increased fertilizer nitrogen use. Although an increased rate of fertilizer nitrogen application has been advocated to meet the growing demand for food, it is unrealistic to advise the farmers to apply fertilizers they could hardly afford, and whose prices are likely to escalate in the years ahead. In addition, when they are not applied judiciously there are problems of environmental pollution as plants are capable of taking up only a relatively small portion of the applied nitrogen, a substantial amount being lost through various chemical and biological processes. The exploitation of cheaper alternatives or supplements to fertilizers have therefore gained much interest in recent years.
Our increased interest in biological nitrogen fixation as a supplement or alternative to nitrogen fertilizers led to the convening of a consultants' meeting on `The Role of Isotopes in Studies on Nitrogen Fixation and Nitrogen Cycling by Blue-Green Algae and the Azolla-Anabaena azollae Association', in Vienna from 11--15 October 1982. The consultants' group recommended that the Joint FAI/IAEA Division of Nuclear Techniques in Food and Agriculture embark on a coordinated research programme in this field and that initial emphasis should be placed on Azolla-Anabaena symbiosis. As a result, such a programme was initiated in 1984, which was concluded in 1989. The results and conclusions reported here are those that were generated during the five years of its operation.