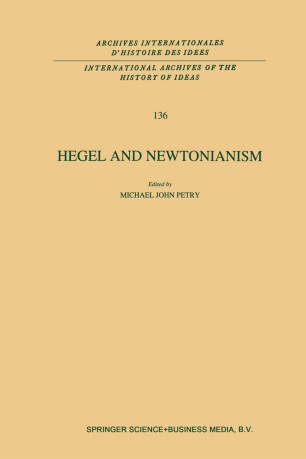 It could certainly be argued that the way in which Hegel criticizes Newton in the Dissertation, the Philosophy of Nature and the lectures on the History of Philosophy, has done more than anything else to prejudice his own reputation. At first sight, what we seem to have here is little more than the contrast between the tested accomplishments of the founding father of modern science, and the random remarks of a confused and somewhat disgruntled philosopher; and if we are persuaded to concede that it may perhaps be something more than this - between the work of a clearsighted mathematician and experimentalist, and the blind assertions of some sort of Kantian logician, blundering about among the facts of the real world. By and large, it was this clear-cut simplistic view of the matter which prevailed among Hegel's contemporaries, and which persisted until fairly recently. The modification and eventual transformation of it have come about gradually, over the past twenty or twenty-five years. The first full-scale commentary on the Philosophy of Nature was published in 1970, and gave rise to the realization that to some extent at least, the Hegelian criticism was directed against Newtonianism rather than the work of Newton himself, and that it tended to draw its inspiration from developments within the natural sciences, rather than from the exigencies imposed upon Hegel's thinking by a priori categorial relationships.