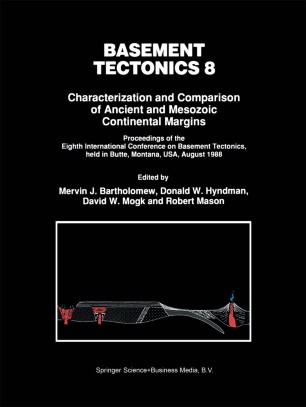 Characterization and Comparison of Ancient and Mesozoic Continental Margins

Part of the Proceedings of the International Conferences on Basement Tectonics book series (ICBT, volume 2)

The 8th International Conference on Basement Tectonics was held in Butte, Montana, August 8-12,1988. Historically, basement tectonics conferences have focused on such topics as reactivation of faults, the influence of basement faults on metallogeny and hyrocarbon accumulation, and the use of geophysical and remote sensing techniques to interpret subsurface and surface geology. The 8th Conference diverged from past conferences in that a unifying theme was selected. Because ancient major terrane or cratonic boundaries are often postulated to be fault zones which are subsequently reactivated, the conference was organized to examine all aspects of ancient continental margins and terrane boundaries and to compare younger (Mesozoic) ones, about which more is known, with older (Paleozoic and Precambrian) ones. Moreover, because the 8th Conference was held in the northwestern United States, a greater emphasis was placed on the Mesozoic margin of western North America and the North American shield. The seven oral sessions and four poster sessions all dealt with aspects of the conference theme: characterization and comparison of ancient continental margins. The organizers extend their thanks to those individuals who graciously consented to serve as moderators for the oral sessions: John M. Bartley, Mark S. Gettings, M. Charles Gilbert, John M. Guilbert, Donald W. Hyndman, William P. Leeman, Robert Mason, and A. Krishna Sinha. The program with abstracts volume was prepared by S. E. Lewis and M. J. Bartholomew.