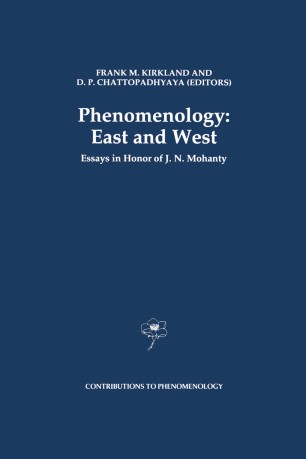 Essays in Honor of J.N. Mohanty

Part of the Contributions to Phenomenology book series (CTPH, volume 13)

To know the work of Jitendra Nath Mohanty even slightly is to commence to appreciate it immensely. Lucidity and sagacity have been its armor; originality and ingenuity have been its strength. And wearing the former and wielding the latter have become so persistent a mark of his work as to suggest that their appeal for Mohanty lies altogether more in the refmed reaches of philosophical craftsmanship than on the coarse ground of intellectual partisanship. The multifaceted character of his work in phenomenology and Indian philosophy has never left us palled by its significance and, as a consequence, has always left us conceding its command on our philosophical discourse. It has fulfilled the most welcomed promise of striking the chords of both imagination and reason by exposing Husserlian phenomenology to the concerns of both the so-called "analytical" and "continental" traditions and by exposing the philosophical tradition of Indian thought to the intricacies of Husserl. Although charting and periodizing the body ofMohanty' s work in phenomeno­ logy may be the function of a memory inconspicuous for originality and liveli­ ness, they nonetheless offer a precis conspicuous for the variety of topics that Mohanty has both engaged and enriched. Mohanty's career in phenomenology can be characterized by three phases, each concentrating on different themes, but with the latter two also epitomizing a more incisive and deeper discussion of the issues raised in the first.