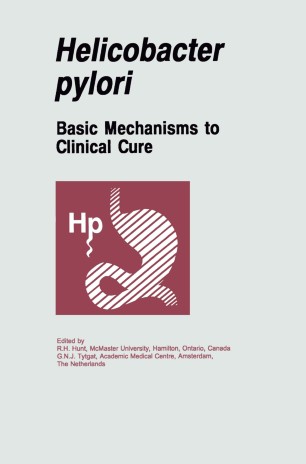 Helicobacter pylori has attracted widening interest from basic scientists and clinical investigators and the information on this organism is increasing exponentially. It is now accepted that H. Pylori is the most important cause of chronic active gastritis. Furthermore, data have confirmed a marked reduction in the relapse rate of both duodenal and gastric ulcer after eradication of the organism. These important clinical observations have served as a strong stimulus to the investigation of the basic mechanisms involved in the pathogenesis of H. pylori-associated inflammation and the subsequent alterations of gastroduodenal function and gastric mucosal architecture.
The book contains chapters by a multidisciplinary, international group of basic scientists and clinical investigators who focus on various microbiological aspects of H. pylori, on the role of H. pylori in peptic ulcer and gastric cancer, and the current status of therapy.
The book contains the proceedings of the conference on `Helicobacter pylori: Basic Mechanisms to Clinical Cure', held at Amelia Island, Florida, U.S.A., on November 3--6, 1993.