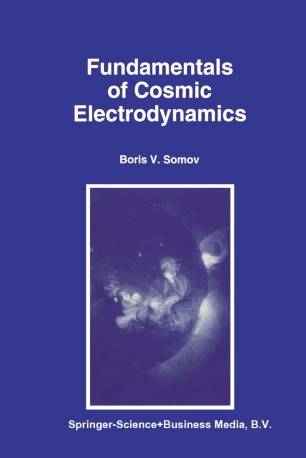 Cosmic electrodynamics is the specific branch of plasma physics which studies electromagnetic phenomena -- mostly the role of electromagnetic forces in dynamics of highly-conducting compressible medium in the solar interior and atmosphere, solar wind, in the Earth's magnetosphere and magnetospheres of other planets as well as pulsars and other astrophysical objects.
This textbook is written to be used at several different levels. It is aimed primarily at beginning graduate students who are assumed to have a knowledge of basic physics. Starting from the language of plasma physics, from Maxwell's equations, the author guides the reader into the more specialized concepts of cosmic electrodynamics.
The main attention in the book is paid to physics rather than maths. However, the clear mathematical image of physical processes in space plasma is presented and spelled out in the surrounding text. There is not another way to work in modern astrophysics at the quantitative level.
The book will also be useful for professional astronomers and for specialists, who investigate cosmic plasmas from space, as well as for everybody who is interested in modern astrophysics.