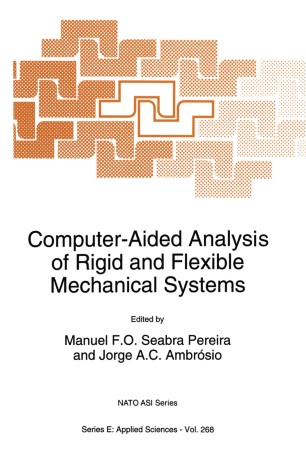 This book contains the edited version of the lectures presented at the NATO ADVANCED STUDY INSTITUTE on "COMPUTER AIDED ANALYSIS OF RIGID AND FLEXIBLE MECHANICAL SYSTEMS". held in Troia. Portugal. from the 27 June to 9 July. 1993. and organized by the Instituto de Engenharia Mecanica. Instituto Superior Tecnico. This ASI addressed the state-of-art in the field of multibody dynamics. which is now a well developed subject with a great variety of formalisms. methods and principles. Ninety five participants. from twenty countries. representing academia. industry. government and research institutions attended this Institute. This contributed greatly to the success of the Institute since it encouraged the interchange of experiences between leading scientists and young scholars and promoted discussions that helped to generate new ideas and to defme directions of research and future developments. The full program of the Institute included also contributed presentations made by participants where different topics have been explored. Such topics include: formulations and numerical aspects in rigid and flexible mechanical systems; object-oriented paradigms; optimal design and synthesis; robotics; kinematics; path planning; control; impact dynamics; and several application oriented developments in weapon systems. vehicles and crash worthiness. These papers have been revised and will be published by Kluwer in a special issue of the Journal of Nonlinear Dynamics and in a forthcoming companion book. This book brings together. in a tutorial and review manner. a comprehensive summary of current work and is therefore suitable for a wide range of interests.