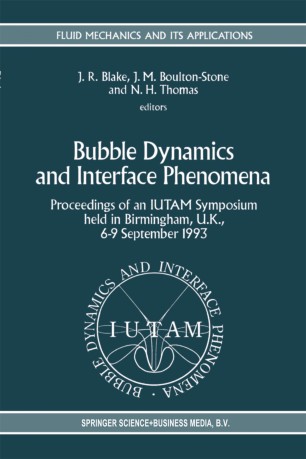 Proceedings of an IUTAM Symposium held in Birmingham, U.K., 6–9 September 1993

Part of the Fluid Mechanics and Its Applications book series (FMIA, volume 23)

This volume contains papers presented at the IUTAM Symposium on Bubble Dynamics and Interface Phenomena held at the University of Birmingham from 6-9 September 1993. In many respects it follows on a decade later from the very successful IUTAM Symposium held at CALTECH in June 1981 on the Mechanics and physics of bubbles in liquids which was organised by the late Milton Plesset and Leen van Wijngaarden. The intervening period has seen major development with both experiment and theory. On the experimental side there have been ad­ vances with very high speed photography and data recording that provide detailed information on fluid and interface motion. Major developments in both computer hardware and software have also led to extensive improvement in our understand­ ing of bubble and interface dynamics although development is still limited by the sheer complexity of the laminar and turbulent flow regimes often associated with bubbly flows. The symposium attracts wide and extensive interest from engineers, physical, chemical, biological and medical scientists and applied mathematicians. The sci­ entific committee sought to achieve a balance between theory and experiment over a range of fields in bubble dynamics and interface phenomena. It was our intention to emphasise both the breadth and recent developments in these various fields and to encourage cross-fertilisation of ideas on both experimental techniques and theo­ retical developments. The programme, and the proceedings recorded herein, cover bubble dynamics, sound and wave propagation, bubbles in flow, sonoluminescence, acoustic cavitation, underwater explosions, bursting bubbles and ESWL.