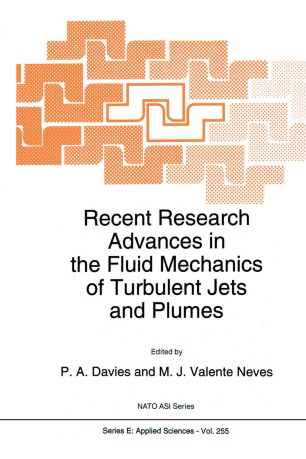 Challenging problems involvrllg jet and plume phenomena are common to many areas of fundamental and applied scientific research, and an understanding of plume and jet behaviour is essential in many geophysical and industrial contexts. For example, in the field of meteorology, where pollutant dispersal takes place by means of atmospheric jets and plumes formed either naturally under conditions of convectively-driven flow in the atmospheric boundary layer, or anthropogenically by the release of pollutants from tall chimneys. In other fields of geophysics, buoyant plumes and jets are known to play important roles in oceanic mixing processes, both at the relatively large scale (as in deep water formation by convective sinking) and at the relatively small scale (as with plume formation beneath ice leads, for example). In the industrial context, the performances of many engineering systems are determined primarily by the behaviour of buoyant plumes and jets. For example, (i) in sea outfalls, where either sewage or thermal effluents are discharged into marine and/or freshwater environments, (ii) in solar ponds, where buoyant jets are released under density interfaces, (iii) in buildings, where thermally-generated plumes affect the air quality and ventilation properties of architectural environments, (iv) in rotating machinery where fluid jet~ are used for cooling purposes, and (v) in long road and rail tunnels, where safety and ventilation prcedures rely upon an understanding of the behaviour of buoyant jets. In many other engineering and oceanographic contexts, the properties of jets and plumes are of great importance.