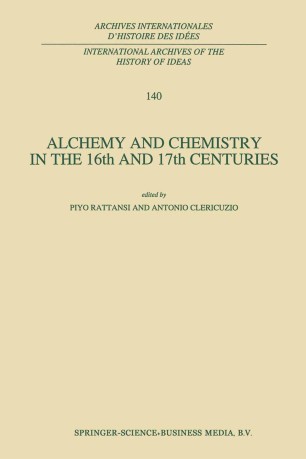 Alchemy and Chemistry in the 16th and 17th Centuries

The present volume owes its ongm to a Colloquium on "Alchemy and Chemistry in the Sixteenth and Seventeenth Centuries", held at the Warburg Institute on 26th and 27th July 1989. The Colloquium focused on a number of selected themes during a closely defined chronological interval: on the relation of alchemy and chemistry to medicine, philosophy, religion, and to the corpuscular philosophy, in the sixteenth and seventeenth centuries. The relations between Medicina and alchemy in the Lullian treatises were examined in the opening paper by Michela Pereira, based on researches on unpublished manuscript sources in the period between the 14th and 17th centuries. It is several decades since the researches of R.F. Multhauf gave a prominent role to Johannes de Rupescissa in linking medicine and alchemy through the concept of a quinta essentia. Michela Pereira explores the significance of the Lullian tradition in this development and draws attention to the fact that the early Paracelsians had themselves recognized a family resemblance between the works of Paracelsus and Roger Bacon's scientia experimentalis and, indeed, a continuity with the Lullian tradition.