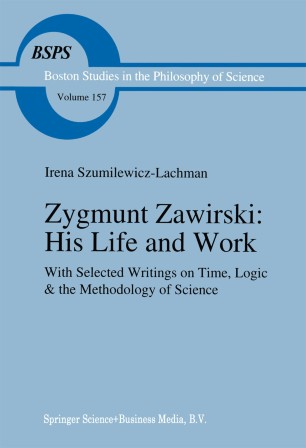 Zygmunt Zawirski: His Life and Work

With Selected Writings on Time, Logic and the Methodology of Science

Part of the Boston Studies in the Philosophy of Science book series (BSPS, volume 157)

Among the extraordinary Polish philosophers of the past one hundred years, Zygmunt Zawirski deserves to be given particular attention for his fusion of analytic and historical scholarship. Strikingly versatile, and con­ tributing original work in all his fields of competence, Zawirski thought through issues in the philosophical aspects of relativity theory, on the claims of intuitionalistic foundations of mathematics, on the nature and usefulness of many-value Logics, and on the calculus of probability, on the axiomatic method in science and in the philosophy of science, on the genesis and development of scientific and philosophical concepts, and in his crowning achievement, the conceptual history of notions of time. His work has been too little known in English despite the respect which has been so clearly shown by his Polish COlleagues and students. In this generous selection from his papers and from his great critical study L' Evolution de la Notion du Temps, Dr. Irena Szumilewicz-Lachman has provided a clear account of Zawirski's achievement; and she has written a fine comprehensive introductory essay which provides both the personal and historical context of his work and a systematic survey of his principal publications.