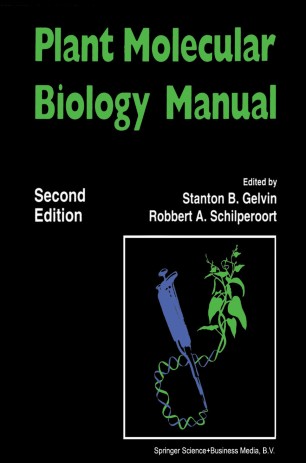 Five years ago, the first edition of the Plant Molecular Biology Manual appeared. At that time, the editors felt that the field of plant molecular biology had matured to a point that the publication of a series of protocols in plant molecular biology was warranted. During the past five years, the field of plant molecular biology has expanded rapidly. This expansion is, among other things, reflected by the presence of several journals in the plant sciences, as well as by the increasing amount of plant sciences articles that are published in the more general journals. In 1991 approximately 3000 people attended the Third International Congress of Plant Molecular Biology in Tucson, Arizona, where more than 2000 posters were presented. It is also remarkable to see that nowadays botanical and physiological meetings pay a considerable amount of attention to plant molecular biology. Since the first edition of this manual appeared, we have published, yearly, a series of supplements to the original volume. These supplements covered new subjects and described new methods that had been developed. With time, however, the editors realized that the original manual plus supplements had become cumbersome to use, and we decided to publish a reorganized version of the manual.