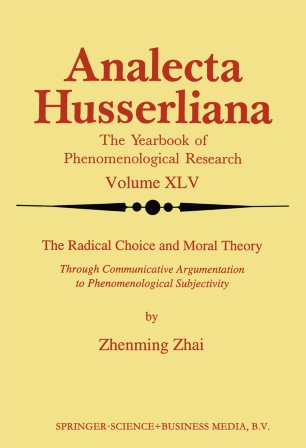 The Radical Choice and Moral Theory

Through Communicative Argumentation to Phenomenological Subjectivity

In a crisp, original style the author approaches the crucial question of moral theory, the `is--ought' problem via communicative argumentation. Moving to the end of Habermas's conception of the communicative action, he introduces the concept of `radical choice' as the key to the transition from the descriptive to the normative. Phenomenological subjectivity of the intersubjective life-world is being vindicated as the `arch-value' of all derivative values, or the first principle for all normative precepts.
With exceptional acumen and mastery of the philosophical argument, the author -- a young native Chinese lately trained in a Western university -- delineates a fascinating route along which the philosophical question of justification raised in the analytic tradition can be answered on the basis of phenomenology.
A noteworthy contribution to the interplay between the Anglo--American and Continental schools of philosophy.