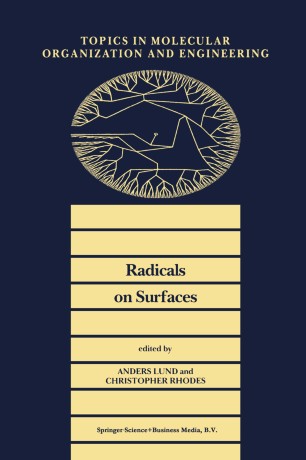 Part of the Topics in Molecular Organization and Engineering book series (MOOE, volume 13)

Studies of free radicals on surfaces are of interest for several reasons: the spontaneous or stimulated formation of radicals from adsorbed molecules may represent one possible mechanism for heterogeneous catalysis. In some cases the radicals are ionic, indicating that primary oxidation and reduction reactions occur. Radicals can also be used as probes to investigate diffusion processes on catalytic surfaces. The first direct observations were made more than 30 years ago, but detailed studies of structure, reactions and mobility have only recently become feasible with the advent of powerful spectroscopic techniques, to a great extent developed and used by the contributors to this volume.
This comprehensive review describes new trends in the field. Leading experts write about the nature of surface active sites, methods to identify them, and the radicals formed from adsorbed molecules interacting with the surface. The emphasis is on the fundamentals covering thermal, photostimulated and radiation induced reactions as well as diffusion processes. This provides the necessary background for technological applications.
This book will be useful to those who are interested in surface chemistry, heterogeneous catalysis as well as those who want to study reactive intermediates in chemical reactions. It is also of interest to scientists in photo and radiation physics and chemistry.