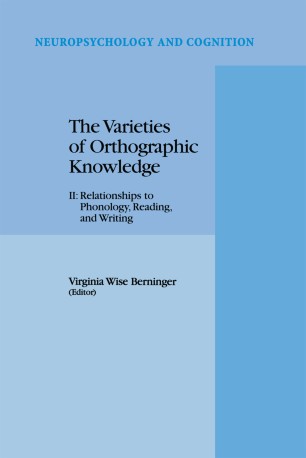 The Varieties of Orthographic Knowledge

Part of the Neuropsychology and Cognition book series (NPCO, volume 11)

The role of orthography in reading and writing is not a new topic of inquiry. For example, in 1970 Venezky made a seminal contribution with The Structure of English Orthography in which he showed how both sequential redundancy (probable and permissible letter sequences) and rules of letter-sound correspondence contribute to orthographic structure. In 1972 Kavanagh and Mattingly edited Language by Eye and by Ear which contained important linguistic studies of the orthographic system. In 1980 Ehri introduced the concept of orthographic images, that is, the representation of written words in memory, and proposed that the image is created by an amalgamation of the word's orthographic and phonological In 1981 Taylor described the evolution of properties. orthographies in writing systems-from the earliest logographies for pictorial representation of ideas to syllabaries for phonetic representation of sounds to alphabets for phonemic representation of sounds. In 1985 Frith proposed a stage model for the role of orthographic knowledge in development of word recognition: Initially in the logographic stage a few words can be recognized on the basis of partial spelling information; in the alphabetic stage words are recognized on the basis of grapheme-phoneme correspondence; in the orthographic stage spelling units are recognized automatically without phonological mediation. In 1990 Adams applied connectionism to an analysis of the orthographic processing of skilled readers: letter patterns emerge from the association units linking individual letters.