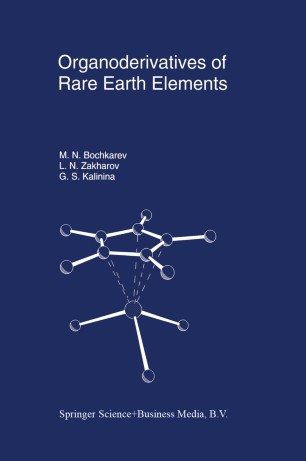 The present book is based on the work of M.N.Bochkarev, G.S.Kalinina, L.N. zakharov and S.Ya.Khorshev. The Russian edition of that book appeared under the same title in 1989 and covered literature data up to the middle of 1986. Since that time the number of publications on this subject increased significantly. In this volume we include all the data published up to the end of 1990, as well as some of the most important relevant articles of 1991. Therefore, this book should be considered as a new book, devoted to the same problems, rather than as just a translation of the mentioned issue. This book deals with compounds of scandium, yttrium, lanthanum and lanthanoids containing direct metal-carbon bond, Le. with the real organometallic complexes of these metals. Besides, the volume includes the rare earth complexes, in which organic ligand is bonded to the metal atom via the atom of another element of the Periodic Table. In other words, the book includes all classes of rare earth organoderivatives. Carboxilates, fl-diketonates and related chelates are the exceptions, because their properties are closer to inorganic compounds and they were fully described elsewhere. It should be noted, that "rare earth elements", "rare earth metals", "lanthanoids" and related terms are used in this book for indicating scandium, yttrium, lanthanum and the following 14 elements of the Periodic Table.