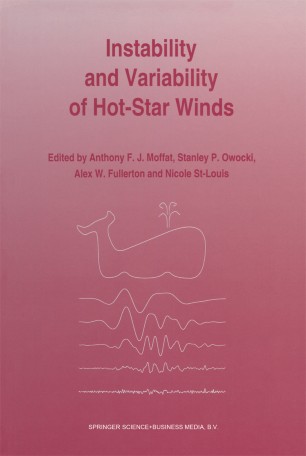 Instability and Variability of Hot-Star Winds

This specialized workshop was conceived during the workshop on "Non­ isotropic and Variable Outflows from Stars", which was held at the Space Telescope Science Institute in October, 1991. At that meeting, the four of us collectively decided that the time was ripe for an even more focussed discussion of the basic issues in the area of hot-star wind instability and its observable manifestations. Not that the big problems have been solved! Rather, we are currently in a phase of rapid development, both with regard to the models and to the observations. The key issue at this new workshop would be to decide how the time-dependent structures observed in hot-star winds (e. g. , NACs, DACs, blobs, clumps, filaments, shells, puffs, jets, etc. ) relate to radiative and other instabilities. Further questions concern the role of turbulence and the nature of its driver, and the effect of stellar rotation, pulsation, and magnetic fields on time-dependent phenomena in hot-star winds. Of no less importance is the impact of stellar wind variability on the derivation of mass-loss rates, on stellar evolution, and on momentum/energy deposition in the interstellar medium. To attain our goal of maximum confrontation (in the positive sense!) we decided: (1) to limit the workshop to the observers and theoreticians most active in this field in the world; (2) to insist that virtually all participants present a talk, thereby avoiding the distraction of poster sessions; and (3) to allocate approximately half of the allotted time to discussion.