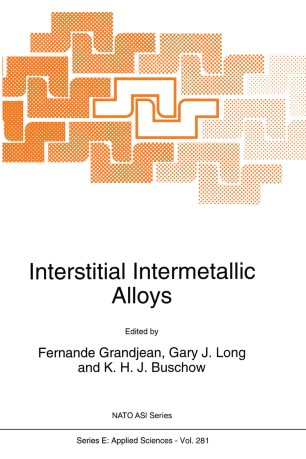 It is well known that the density of molecular hydrogen can be increased by compression and/or cooling, the ultimate limit in density being that of liquid hydrogen. It is less well known that hydrogen densities of twice that of liquid hydrogen can be obtained by intercalating hydrogen gas into metals. The explanation of this unusual paradox is that the absorption of molecular hydrogen, which in TiFe and LaNis is reversible and occurs at ambient temperature and pressure, involves the formation of hydrogen atoms at the surface of a metal. The adsorbed hydrogen atom then donates its electron to the metal conduction band and migrates into the metal as the much smaller proton. These protons are easily accomodated in interstitial sites in the metal lattice, and the resulting metal hydrides can be thought of as compounds formed by the reaction of hydrogen with metals, alloys, and intermetallic compounds. The practical applications of metal hydrides span a wide range of technologies, a range which may be subdivided on the basis of the hydride property on which the application is based. The capacity of the metal hydrides for hydrogen absorption is the basis for batteries as well as for hydrogen storage, gettering, and purification. The temperature-pressure characteristics of metal hydrides are the basis for hydrogen compressors, sensors, and actuators. The latent heat of the hydride formation is the basis for heat storage, heat pumps, and refrigerators.