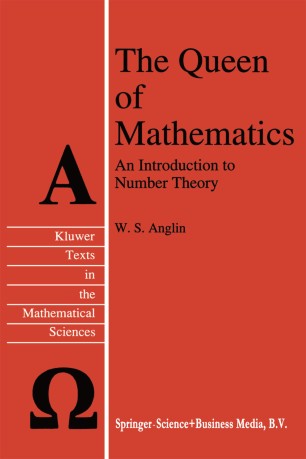 The Queen of Mathematics

An Introduction to Number Theory

Part of the Kluwer Texts in the Mathematical Sciences book series (TMS, volume 8)

Like other introductions to number theory, this one includes the usual curtsy to divisibility theory, the bow to congruence, and the little chat with quadratic reciprocity. It also includes proofs of results such as Lagrange's Four Square Theorem, the theorem behind Lucas's test for perfect numbers, the theorem that a regular n-gon is constructible just in case phi(n) is a power of 2, the fact that the circle cannot be squared, Dirichlet's theorem on primes in arithmetic progressions, the Prime Number Theorem, and Rademacher's partition theorem.
We have made the proofs of these theorems as elementary as possible.
Unique to The Queen of Mathematics are its presentations of the topic of palindromic simple continued fractions, an elementary solution of Lucas's square pyramid problem, Baker's solution for simultaneous Fermat equations, an elementary proof of Fermat's polygonal number conjecture, and the Lambek-Moser-Wild theorem.