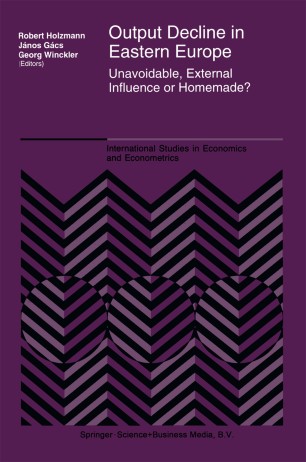 Part of the International Studies in Economics and Econometrics book series (ISEE, volume 34)

The first phase of transition to a market economy in Central and Eastern Europe was characterized by a sharp output decline. The fall in real GDP exceeded 20% while real industrial production decreased even by 40%. Output Decline in Eastern Europe aims at providing comprehensive, multi-factor explanations for this unique, painful experience. Various hypotheses are analyzed: credit and fiscal policies may have been too tight; the collapse of the CMEA and the USSR came as a shock; domestic producers were neither experienced, nor flexible enough to adjust the output to new patterns of demand. Output Decline in Eastern Europe contains a unique combination of authors from East and West who extensively analyze new data based on country studies.
Understanding the causes of recent output decline, the subject matter of this volume may help to assess the prospects for Eastern Europe.
The book is addressed to researchers and students as well as interested officials who deal with the transition of formerly centrally planned economies in Central and Eastern Europe.