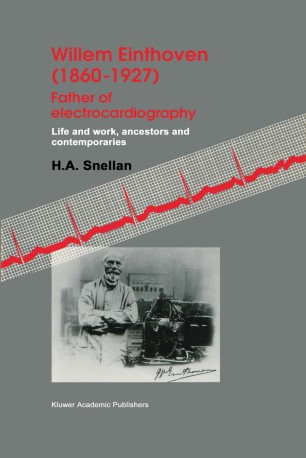 Life and work, ancestors and contemporaries

This is the first book on Einthoven in the English language; two earlier extensive reviews of his life and work were published in Dutch by his former co­ workers Hoogerwerf and de Waart, in 1946 and 1957 respectively; the latter provides a brief summary in English; the former also wrote a succinct article on 73 Einthoven in English. 74 Hoogerwerf's review mentioned above was published as a chapter in "Helden der Wetenschap" i. e. "Heroes of Science," a book on Dutch Nobel Prize winners which has a somewhat romantic character corresponding 108 with the title. On the other hand, de Waart's book gives more scientific and technical details, and provides full reference to Einthoven's papers, his assistants and the doctoral theses written under Einthoven's guidance. On the whole there­ fore the latter is the best source of information and I have used it often and gratefully. At the same time it requires more effort to read; the other book may have had a wider reading public. The main reason however for which I decided to write a book on Eintho­ ven and was encouraged to do so by the Einthoven Foundation, is not the want of an English text, but the fact that more information has become available in the meantime.