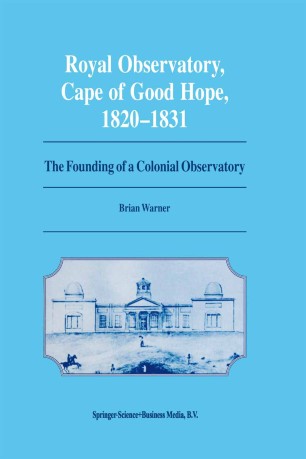 This book, which has been in the making for some eighteen years, would never have begun were it not for Dr. David Dewhirst in 1976 kindly having shown the author a packet of papers in the archives of the Cambridge Obser­ vatories. These letters and miscellaneous papers of Fearon Fallows sparked an interest in the history of the Royal Observatory at the Cape of Good Hope which, after the diversion of producing several books on later phases of the Observatory, has finally resulted in a detailed study of the origin and first years of the Observatory's life. Publication of this book coincides with the 175th anniversary of the founding of the Royal Observatory, e.G.H. Observatories are built for the use of astronomers. They are built through astronomers, architects, engineers and contractors acting in concert (if not always in harmony). They are constructed, with whatever techniques and skills are available, from bricks, stones and mortar; but their construction may take a toll of personal relationships, patience, and flesh and blood.

`... this is an absorbing and scholarly book by an erudite author, being one of a series he has written on the scientific and cultural life of the Cape colony. I can highly recommend it.'
Journal for the History of Astronomy, 30:3 (1999)